KUALA LUMPUR:  The Federal Territory Islamic Religious Department (Jawi) on Saturday denied that it would allow the four Muslims who were dropped from the Miss Malaysia World 2013 pageant to compete in the finals.Its director, Datuk Che Mat Che Ali, said no decision had been made by Jawi on the matter."It is just a speculation as the case is still under investigation. Further action on the four participants will only be decided by the court," he told reporters after the flagging off of a motorcycle convoy on a "Dakwah Ramadan" expedition to the Al-Ihsan Orphanage in Bentong, here Saturday. 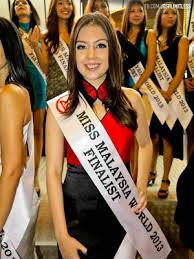 Che Mat said this in response to a report in the news portal saying that the four Muslim finalists dropped from the beauty pageant might be allowed to compete following a review by Jawi after an appeal by Datuk Anna Lim, the pageant's organiser.

He advised the public to not speculate on the matter. - Bernama
at 4:03 PTG